An online casino might be easy to register and understand. However, its terms may be too technical for some to understand without reviewing the glossary of terms. Luckily for you, AlphaCasinos got you covered! 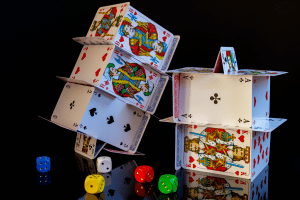 Action: The total sum bet by a player throughout a game. That player had an action of 500 coins during the game.
Add-On: Additional chips bought from a player. That player Added-On 500 more coins.
Aggregate Limit: The total amount of money a casino gives out to a player. That Casino offers a 500 coin Aggregate Limit as winnings.
All-In: Putting every coin in the pot. That player went all in.
Ante: The minimum bet players had to make in order to start the game. In order to play blackjack, you have a 10 coins Ante.
Arm: Fairly manipulating the outcome of dice rolling. Look at that player! He is an arm. He’s getting all the numbers he needs.

Banker: The players who deal with cards. Player C is the Banker.
Blind Bet: Bet made without checking the cards, generally in poker. Yesterday I made a blind bet in the Casino.
Blinds: When a player is forced to bet. Please put your blinds in.
Break-Even Point: When the bets increase to the point that matches with the payoff you will receive. I stopped playing at Break-Even point.
Breaking the bank: When a player wins huge. Tonight I am going to the casino and hopefully, I will be breaking the bank.
Buy-In: Exchanging money for chips to play a game. The buy-in to play that game is $5 for 50coins.

Call: When a player matches the bet in place. Player A Calls on Player B.
Capping: Fair cheating, when a player increases the original chips to increase the winnings. Player A cap on the winnings.
Card Counting: Mainly used in Blackjack. It’s a technique to assess the probability of the next hand. It’s important to count the cards so you know if you are likely to win.

D’Alembert Betting System: A system used by players. If you win, you reduce your next bet by one unit, if you lose you increase your unit by 1. I Use D’Alembert Betting System in the casino.
Deposit: Putting money in your online casino account to start playing. First Step is to deposit your money in the account.
Deuce: When the dice rolls to 2. The dice are rolled and it’s deuce.
Dime Bet: When someone bets $1000. I just did a dime bet
Double or Nothing: A bet which either doubles the amount betted or nothing. You either double or nothing.
Doubling up: It’s a system used generally when a player loses the previous bet. I just lost, I need to double up in the next one.

Edge: Having an advantage over the competitors. I have an edge above the other players.
End of the day Betting Effect: Betting higher amounts to recover from the money lost at the end of the game. I’m having an end of the day betting effect.
En Plein: A bet placed on a single number. En Plein on number 1.
En Prison Rule: It’s important to understand that not all online casinos allow this. This means an online casino offers to get back half of their bet if they lose a game of roulette. That online Casino accepts En Prison Rule.

Fish: The worst money loser. Player A is the fish of this game.
Flop: When the initial cards are dealt face up. Prepare for the flop.

Hand: The set of cards one possess during the round. I have this hand.
Hit: A blackjack player asking for another card. Click Hit Me.
Honeymoon period: When you are a beginner and you are winning for some time. I’m on my honeymoon period.
Hot: A player who is on a winning streak. Player B is hot.

Inside Bet: It’s a bet on any individual number in roulette. Inside Bet of number 6.
Irregular Playing Patterns: To take a maximum bonus from an online casino you have to play a certain amount of spins, maybe more or less than you used to. This week I had an irregular playing pattern so I can get that Bonus!.

Jackpot: A huge amount of money won through a lottery or slot. That online slot game offers a jackpot.
Jacks or Better: What you need to win in some games. Jacks or Better to win.

Kicker: When you have a card but you still don’t have a Flush or Straight in poker. This card is such a kicker.

Lay the odds: Betting on favorable odds. You better lay the odds so you have a higher chance to win.
Load Up: When you bet the maximum amount. That Player just loaded up.
Lobby: The main page online. To find the tournaments please go to the lobby.
Low Roller: A gambler that doesn’t risk big amounts of the bet. That player is such a low roller.

Natural: Having a total of 21 in Blackjack case or 8 and 9 in Baccarat. You’ve got a Natural!
Net Winnings: Total Winnings – Loses = Net Winnings. Your net winnings are $5.
Non-Negotiable Chips: Chips that can’t be changed for cash. Usually, they are a bonus. These are non-negotiable chips, you can’t withdraw.
Nut: The expectation of someone to win a certain amount. I hope I nut at least $50 today.

Odds: Probability of winning. The odds are in your favor.
Open: The first player to bet. Player D is to open the game.
Outside Bet: Placing the bets on the numbers outside of the roulette. I’m going to do an outside bet and pick 34.

Paint: The cards Ace, Jack, Queen or King. My cards are all paint.
Paroli: When a player increases the bet with the belief that they will win again. Player B is all paroli.
Pass: Folding instead of betting. The cards don’t seem to be good. I better pass.
Pat: A hand of total 17 or more and can’t have any more cards. You can’t take any more cards as you have a pat.
Payline: the amount of winning reels in a slot machine. This slot game has 25 paylines.
Payoff: Money received as a result of winning. You have a $25 dollar pay off.
Pigeon: A gambler who isn’t knowledgeable of the game. He’s gonna lose a lot of money, He’s a Pigeon!
Pocket Cards: The Cards which are downwards in a poker game. Who knows what are the pocket cards.
Pot: The total amount of money accumulated by all players. The winner of this game can win 10000 Coins.
Progressive Jackpot: A Cumulative jackpot won generally by adding bonuses to the slot games. The progressive jackpot of this slot online game is $1,000,000

Quads: Four of a kind. I got a quad.
Qualifier: Minimum hand to get a share from the pot. You have a qualifier, you get 200 coins.

Rapid Roulette: A roulette without outside numbers. This type of roulette is a rapid roulette.
Reels: The lines full of symbols on a slot game. These reels have jungle themed symbols.
River: The final card given in Hold’Em. This is your river for this game.
Royal Flush: When you have a Ten, Jack, Queen, King, and Ace. It’s the best hand in poker. You’ve got a Royal Flush.

Shark: A player who says he’s a newbie but turns out to be really good. He’s won again, he’s a shark.
Showdown: It’s when the player’s showoff cards so the winner is determined. Showdown time, show off your cards.
Stack: A pile of chips. This is my stack.
Spinner: A winning streak. I’ve won the first game. Let’s go on a spinner now.
Standing hand: A and of 17+ value in Blackjack. I have a standing hand. Should I risk take another card?
Suit: When someone has a hand with one of each spade, clubs, hearts, and diamond. I have a suit, is it good enough though?

Tap Out: Losing every ounce of chips, which leads to the players’ end game. You’ve been tapped out of the game. Please subscribe to another game.
Three of a Kind: Having three cards of the same rank. I have a three of a kind, I could win the game or get a share of the pot.

Underplay: A bet against all odds. I will underplay as it offers a great payout.

VIP: A player who plays a lot with the same online casino. A VIP tends to get more bonuses and offers.

Wager: Bet. Player A put a $5 wager.
Web Wallet: An online money platform. To play with Bitcoin you need a web wallet.
Whale: A player who bets high amounts. That player just bet $10000000!!! He’s a whale!!
Withdrawal: When a player withdraws money from the online casino account to the personal card. You can withdraw your money now!