LeoVegas is an online casino which can be considered as a recent entrant in the world of online gambling.

They have also had their own share of issues with users and in this LeoVegas Casino Review, we will try to uncover the truth behind the rumours which say that LeoVegas is not that honest when it comes to paying its users.

LeoVegas is an online casino which was launched in 2012 and is registered and licenced in Malta and the UK.

The company also holds sports betting and Casino licences issued from UK Gambling Commission in addition to licences granted by Malta Gaming Authority. LeoVegas has been able to establish itself in the short amount of time since it was launched.

This has been possible despite restrictions on players from several countries which are home to large number of casino players such as:

The terms and conditions of the LeoVegas site also restrict bonuses to players from:

Austria, Finland, Germany, the Netherlands, Norway, Sweden & Switzerland and as such, only players from these countries are eligible for the welcome and other bonuses offered by LeoVegas.

LeoVegas has partnered with many digital gaming solution providers such as NetEnt, Microgaming, Evolution Gaming and Quickspin etc. and this has allowed the company to offer a huge array of casino games of all types to its users.

They also offers almost a huge variety of tablet games, slot games, video slots and live games of all types to its users.

LeoVegas also have a well-praised customer support service which allows all players to get help via Live Chat, Email, UK Freephone (& international phone,) and the site has some of the lowest response time in the industry as even emails are answered within an hour or two.

LeoVegas supports several major currencies with the notable exception of USD as the company doesn’t offer any service to players based in the US and in similar vein supports several payment methods for making deposits and withdrawals to and from LeoVegas site.

Although, the payment methods supported are the ones which are popular in Europe as mainly European countries that are the target market for LeoVegas.

In the past, there have been a spate of negative reviews about LeoVegas and the users have complained that the site administration uses its own interpretation of terms and conditions for not paying out winnings to users.

We will closely examine these cases in the later part of this LeoVegas Casino review.

What to Expect From The LeoVegas Casino 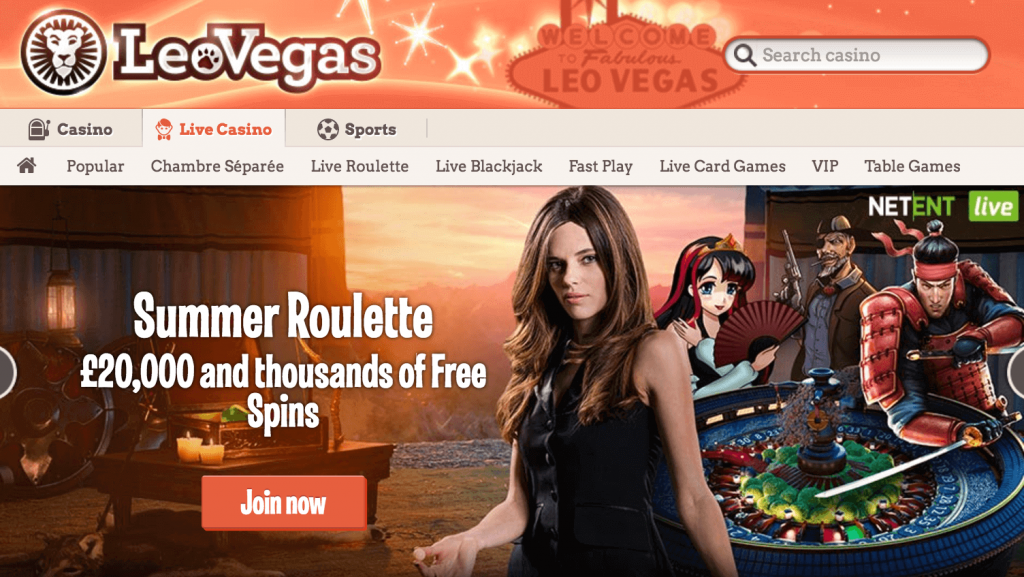 A Look Inside The LeoVegas Casino

LeoVegas Casino is an online casino which has achieved fame in the short amount of time since its launch in 2012.

They offers a vast variety of all types of casino games and it won’t be wrong to say that LeoVegas has a game for every type of casino player.

The casino also offers everything which is offered by its competitors and in most cases, has something extra to offer as an icing on the cake.

It’s this approach of generosity which has helped them solidify their position in the market in such a short amount of time.

LeoVegas offers a vast collection of all sorts of casino games, largely due to its partnerships with some of the most popular and successful providers of casino games such as NetEnt, Microgaming etc.

In addition to some of the popular titles from these partner sites such as Starburst, Mr. Vegas, Mega Moolah, Immortal Romance etc., LeoVegas also has plenty of other traditional table based games such as Roulette, Blackjack etc.

LeoVegas has been accused by some of the players in past of not paying the winnings earned due to their own interpretation of terms and conditions which seemed to be applied arbitrarily to users once they have won a jackpot.

In many such cases LeoVegas reversed its decision after intervention by third party monitoring sites and over years these sorts of complaints have reduced in frequency.

Nonetheless, one needs to be vigilant with this site as they seemed to have a bad reputation in the past. Due to these issues, famed casino review site The Pogg has moved LeoVegas Casino to their not recommended list.

Although, to be fair to LeoVegas, these complaints were reported a few years ago and it seems that the site administration has changed this practice as there has been no similar complaint in recent years.

Other betting review sites have also noted a positive change in the attitude of site administration and have revised their rating upwards.

Which games does LeoVegas Casino offer?

LeoVegas offers a huge variety of all sort of games ranging from virtual games such as table games, live poker games and video slots to live casino games.

It has more than 12 different variants of blackjack and more than 8 Roulette variants to choose from along with hundreds of other games which also include some of the most famous titles launched by its technology partners.

Among the titles from its partners, users can currently choose from NetEnt’s Creature from the Black Lagoon and Starburst, Betsoft’s Mr. Vegas, Microgaming’s Mega Moolah and Immortal Romance, and many others. 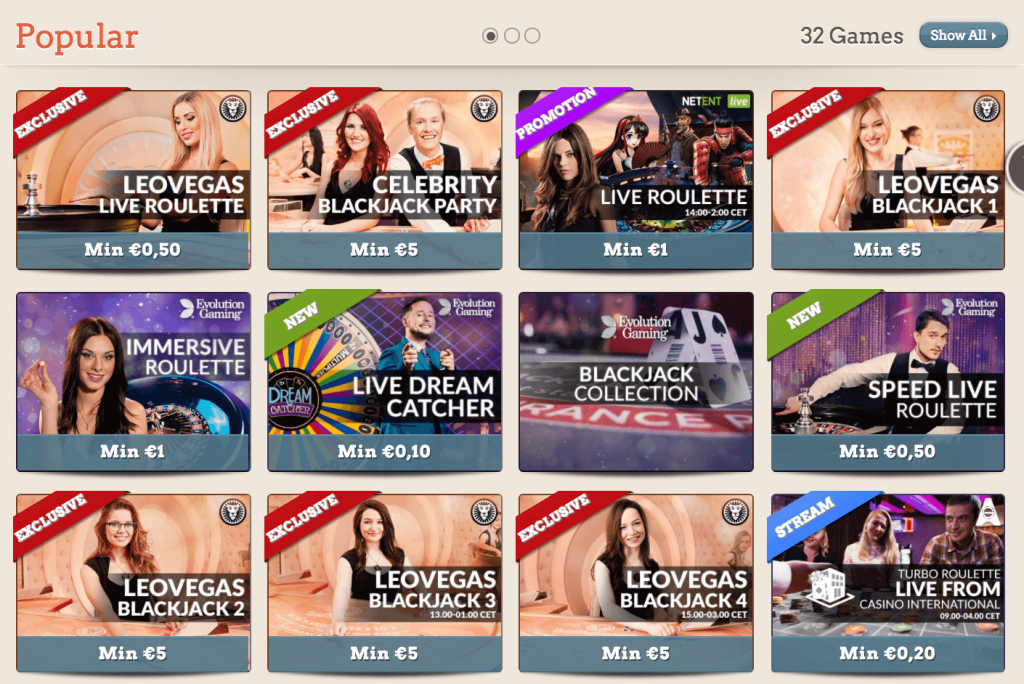 LeoVegas Casino has one of the best live customer support service in the industry and have been highly rated when it comes to providing support to customers.

They also boast some of the lowest response times and provide support via Live Chat, UK Freephone, International Phone and Email.

Although, at present the site doesn’t provides support via social media platforms which is provided by many of their competitors.

As is clear from these currencies, (with the notable exception of Canadian Dollar), LeoVegas at present doesn’t supports any non-european currency due in large part to the fact that the main user base of the site is in European countries.

The choice of deposit and withdrawal methods supported by LeoVegas Casino seems to be limited, particularly when compared with some of their competitors.

Following methods are available for withdrawals:

As the site currently allows deposits only via debit and credit cards (or eWallets), deposits in most cases are credited instantly to the account of the user.

Withdrawals are a bit complex as eWallets provide the easiest way to withdraw funds from LeoVegas since most eWallet withdrawals are processed within 24 hours.

Withdrawals to debit and credit cards are processed within 2-3 working days and bank wire remains the slowest medium to withdraw funds with a processing time of 3-5 working days.

There are minimum and maximum limits placed on both the deposits and withdrawals. The minimum amount which can be deposited or withdrawn is fixed at £/€ 10 (although there is a maximum daily and monthly limit on withdrawals).

No, the LeoVegas website doesn’t mention any fees which may be applied to deposits or withdrawals.

LeoVegas Casino has shunned the mobile app approach and instead has adopted the mobile site route for reaching out to their mobile users or others who may want to play while on the move.

LeoVegas has a responsive mobile site which can be accessed from any browser which supports HTML5 from any mobile device.

Who Is LeoVegas Casino Good For?

On a first look LeoVegas seems to be good for everyone, but at close inspection it will become clear that this is certainly not the case and truth is a bit more complex.

We’d not recommend LeoVegas to first time players as this site will only suite more experienced casino veterans who already have experience of online gambling as the site has a complex set of T&Cs which may be confusing to most first-time players.

Several factors of this site make it unsuitable for first time users and complex bonus terms is just one of the many factors making this site unattractive for less sophisticated players.

After considering all the features of LeoVegas, we’ve decided to award it a rating of 4 out of 5 stars.

LeoVegas performs well in most areas, although there are certainly some issues such as a lack of support for various languages, complex bonus and pay-out terms, along with restrictions over players from many countries such as the US, Russia etc.

The LeoVegas administration has done a commendable job and have ensured that no such cases have been reported in recent time. Nonetheless, LeoVegas still has a long way to go when it comes to gaining the trust of its main target market of gamblers and casino players.

We hope that you’ve enjoyed this LeoVegas Casino review, please don’t forget to subscribe to our site as we’ll be publishing more such reviews soon.